Man running to catch Mumbai local found to be faster than Buffalo racer and Usain Bolt, gets invite from Sports Authority

It was Rahulji's plan to put up a poor show in Delhi elections to benefit AAP and defeat BJP: Congress

New Zealand cricket team asks ICC to do away with super-over, say 'need better way to decide a tie'

If Kunal Kamra raises right foot before grounding left foot, it will be violation of flight ban: Ministry Of Civil Aviation

New Delhi: After the successful resurrection of Jon Snow by Melisandre, the Indian police has decided to hire her service for their own benefit. The red priestess revived Jon snow’s life by cutting locks of his hair and snips of his beard and burning then in fire while casting spells. 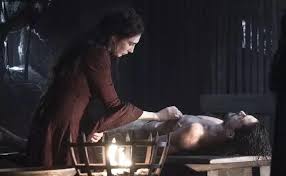 An elated Police Inspector from national capital told Faking News, “Finally we can solve murder cases with great speed and accuracy. We will just take her to the victim, she will revive them, we will ask who killed them and after solving the case, we can let them die again. No more dust gathering files in police stations,crimes will be solved at the speed of light!”

A letter signed by all state police departments has already been sent to Home Minister Rajnath Singh requesting him to appoint Melisandre as a special consultant to Indian Police.

After this news spread like wildfire, government hospitals in the country also wished to seek help from Melisandre . A senior doctor told Faking News,”You all know how overworked the doctors in goverment hospitals are, we can’t take care of all the patients and sometimes we lose people. Now we can always ask Melisandre to revive them. Even if it is for a short duration, it will give us enough time to attend those people.” Meanwhile, political parties across India have criticised this suggestion to use Melisandre to solve murder cases. “When we have our very own ACP Pradyuman to solve every murder, why do we need to take help of a foreigner? What happened to Make in India?” asked a senior Lok Sabha MP.

Modi wants to kill me because I leaked Game Of Thrones spoilers to him: Arvind Kejriwal

We showed more violence as we were losing the TRP race to the violence in Bengal: GOT producers

I advised Daenerys to use cloud cover for Dragon attack: PM Narendra Modi